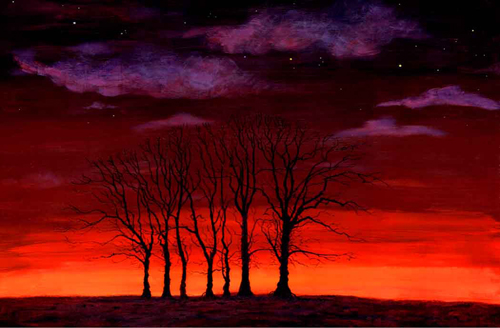 Seven Trees. These trees are in the middle of a field near where I live. Curiously they form a straight line and probably were part of an old field boundary. I first sketched them in 1990, some years later making a small etching-- from the etching I made this painting. So the picture has evolved, the sky becoming progressively more dramatic. There is a folk tale quoted by some, of seven Pendle witches being cursed and turned into trees, but there are similar claims from other places around Pendle Hill.

From an acrylic painting.
Signed Limited Edition of only 195.
Giclee print.  15 x 23in